The KMLabs Halcyon™ repetition-rate stabilized oscillator is popular with customers who need to synchronize oscillator laser pulses with pulses from another laser or with a synchrotron.  Electronics included with the Halcyon lock its output to the customer’s reference signal and can provide timing jitter of less than 150 fs.  Stabilization of the repetition rate is achieved through multiple features including a temperature-stabilized breadboard, a motorized stage for coarse feedback, and a small piezo-mounted mirror for fast feedback.  The KMLabs team works closely with each Halcyon customer to ensure that the system meets their specific needs.  Due to the flexible design of the Halcyon™, it can lock to reference signals over a very wide range:  75 MHz to 4 GHz.

This is a review paper describing time-resolved photoelectron spectroscopies

Photoelectron spectroscopy is a technique in which the electronic structure of materials can be revealed, by exciting them and examing the spectra of the emitted photoelectrons. Adding temporal resoltuion to the technique relies on a stable source of ultrafast probe pulses with which to temporally sample the photoelectron spectra.

One implementation of time-resolved photoelectron spectroscopy takes advantage of the high brightness and highly tunable radiation provided by synchrotron radiation. The ultrafast probe pulses however are not so trivially generated by synchrotrons, so a synchronised ultrafast laser system can instead be employed to provide this aspect of the technique. At the SPring-8 Synchrotron in Japan a Ti:Sapphire laser system is used on one of the beamlines for this purpose. The laser system is seeded by a KM Labs Halcyon Ti:Sapphire oscillator, delivering 85MHz, 20fs 4nJ laser pulses.

Using this beamline and the time resolved photoelectron technique, the time evolution of Si 2p core-level after laser induced surface photovoltage effect was measured. After excitation, the relaxation time varies from ns to µs. 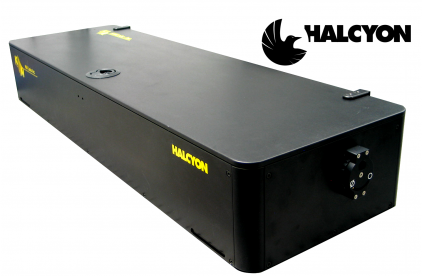