Research experiments utilizing EUV and soft X-ray light in the laboratory are coming of age and opening up exciting new opportunities for scientific discovery.  Specifically, the potential for nanoscale imaging, spectroscopy, and probing ultrafast dynamics are extending the domain of nano and quantum experimentation beyond the specialized expertise of the laser physics lab and into the broader hands of materials scientists, engineers, geologists, and more.  As the applications continue to emerge, success hinges upon the marriage of an appropriate lab-based light source with the necessary experimental station, a connection that inevitably requires some type of beamline.  Such beamlines have been classically built and maintained at major facilities at the expense of significant personnel, time, and financial resources, but it is becoming increasingly clear that a carefully engineered, efficient, and commercially supported design is a strong prerequisite for the continued adoption of EUV-based experimental techniques in the lab.

KMLabs XUUS consists of the necessary equipment for the generation of EUV laser light, but optical elements are required to connect the source to an experiment at high efficiency, stability, and flexibility under vacuum.  This so-called vacuum beamline is an interconnected, evacuated, tubular conduit, which incorporates modular components that may be optionally and readily installed (by the customer) into the beamline and HHG system, as needed--without compromising the beamline vacuum.  These modules are used to reject excess IR light, filter the EUV spectrum, focus the EUV light, monitor the EUV power, replace capillary waveguides, and more.

A useful perspective on the importance of a beamline design can be gained by comparison to the synchrotron community.  The synchrotron itself is a large light source, but its functionality is derived from typically dozens of beamlines branching off the synchrotron ring tangentially and delivering light to multiple  experimental  end stations. Consequently,  beamline  engineering  at  synchrotrons  is  a  practice that has evolved and improved over decades, further empowering the (even more) impressive improvements in the storage rings themselves.

In contrast, laboratory experiments, by the nature of their light sources, tend to be more photon-limited. In these setups, flux is crucial and could be the determining factor in experiment viability. As a result, substantial effort has been placed in both improving the in-band photon flux of high harmonic light sources and removing the out-of-band flux. KMLabs has demonstrated both with the most recent engineering updates of its RAEA Ti:Sapphire pump laser and XUUS high harmonic generation modules (which, together, form the critical components of the Pantheon light source). However, the attentive instrument designer is wise to note that one or two orders of magnitude difference in the light source flux are irrelevant if there are many orders of magnitude to be gained or lost in the beamline downstream. Clearly, the task at hand is to not only maximize the output of the light source, but also to ensure that no photons are being unnecessarily lost in the beamline before they reach the experiment.  To optimize one without the other leads to an experimental setup unable to reach its full potential.

The approach from KMLabs is a holistic view, where the functionality of the entire experimental system is considered in aggregate to ensure that not only is the light source providing the necessary photons, but they are actually reaching the experiment as efficiently as possible and with as little ongoing maintenance as possible. Our vacuum beamline takes into consideration the following design aspects: 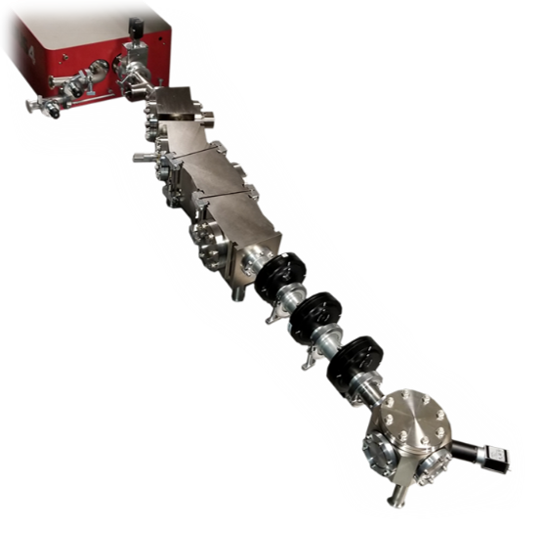