The demand for faster, more efficient, and more compact nanoelectronic devices, like smartphone chips, requires engineers to develop increasingly complex designs. To achieve this, engineers use layer upon layer of very thin films – as thin as only a couple strands of DNA – with impurities added, to tailor the function. However, the presence of these necessary impurities and extreme thinness degrades the material strength, reducing its performance and making it more likely to fail. To date, it was simply not possible to test the stiffness or compressibility of the thinnest of these ultra-thin films. Now, by using high harmonic EUV beams, scientists were finally able to measure the mechanical properties of 5 nm films. What they learned was surprising: as the layers were thinned, the mechanical properties dramatically deteriorated, becoming nearly 10 times flimsier than expected. Additionally, the presence of impurities can be more detrimental to the film’s strength than the effect of its thinning. These findings will influence the design of next generation electronic and other nanoscale devices.

In related research, metalattices were also studied - which are artificial 3D solids, periodic on sub-100 nm length scales, that enable the functional properties of materials to be tuned. However, because of their complex structure, predicting and characterizing their properties is challenging. Using HHG sources, scientists recently demonstrated the first nondestructive measurements of the mechanical and structural properties of metalattices with feature sizes down to 14 nm. By monitoring the time-dependent diffraction of short wavelength light from laser-excited acoustic waves in the metalattices, the researchers extracted their acoustic dispersion, Young’s modulus, filling fraction, and thicknesses. Their measurements were in excellent agreement with macroscopic predictions and potentially destructive techniques such as nanoindentation and scanning electron microscopy, with increased accuracy over larger areas. This finding is interesting because the transport properties of these metalattices do not obey bulk predictions. Finally, this approach is the only way to validate the filling fraction of metalattices over macroscopic areas. These combined capabilities can enable accurate synthesis of nano-enhanced materials. 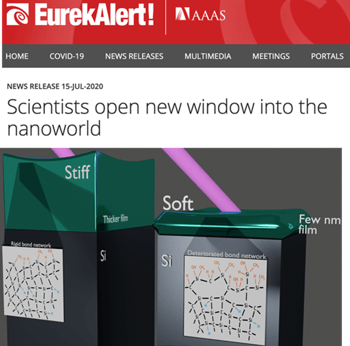 Full characterization of mechanical properties of ~5 nm films to uncover the influence of dopants and surfaces. As the layers thin, the mechanical properties dramatically deteriorate, becoming nearly 10 times flimsier than expected. Additionally, the presence of impurities can be more detrimental to the film’s strength than the effect of its thinning.