The primary focus of KMLabs is to design and manufacture tabletop scale laser sources that span the vacuum ultraviolet (VUV) to extreme ultraviolet (EUV) to soft X-ray (SXR) range of the electromagnetic spectrum—about 1 to 150 nm.  Because laser technology has generally been limited to wavelengths only as short as 193 nm, scientific research in the VUV to SXR range has been relatively less explored. With recent developments in high harmonic generation (HHG), research in this area is coming of age and opening up exciting new opportunities for scientific discovery. Specifically, the potential for nanoscale imaging, spectroscopy, and probing ultrafast dynamics are extending the domain of nano and quantum experimentation beyond the specialized expertise of the laser physics lab and into the broader hands of materials scientists, engineers, geologists, and more. 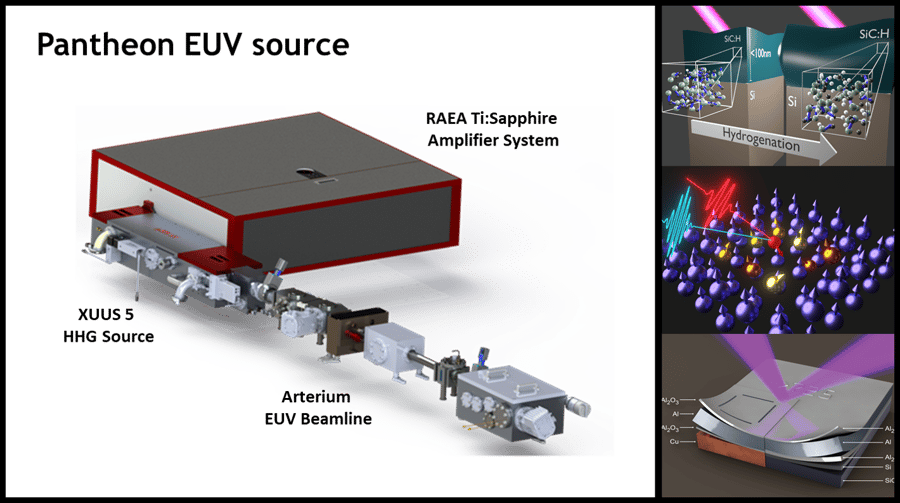 KMLabs offers all three components either as stand alone units—RAEA, XUUS, and Arterium—or as a completely integrated solution—Pantheon.  Choosing KMLabs for your EUV to SXR laser requirements means you have the benefit of owning a product whose technology has been optimized specifically for the HHG process, with 25+ years in the making.

Because HHG is a high order nonlinear process (e.g. conversion from 790 to 13.5 nm is n = 59), any minor defects in the laser performance will scale exponentially and wreak havoc on EUV generation.  For this reason, KMLabs has developed and patented PermacoolTM technology that provides ultrahigh pulse quality from our Ti:Sapphire amplifier systems.  Permacool is at the heart of the RAEA, allowing you to push your system harder without having to worry about the thermal lensing effects that can distort your beam in both time and space as depicted in the simplified cartoon below.

KMLabs’ expertise in cryogenically cooling Ti:Sapphire crystals have allowed us to fine-tune this technology to make the best use of it for HHG.  For instance, KMLabs has observed up to 1000 times more flux at 13.5 nm generation with our cryogenic-cooling technology—even while driving at much lower pulse energies—compared to other commercial solutions that only rely on water-cooling at relatively high room temperature.  In addition to providing ultrahigh pulse quality, Permacool also enables repetition rate flexibility, both in flexibility (software control) and in magnitude (with up to 200 kHz demonstrated). Thus, our RAEA amplifier technology provides truly best-in-class performance for applications that require high pulse quality like HHG, where peak focusable intensity is critical.  To learn more about the benefits of our Permacool technology, please read our application notes on EUV generation via HHG with cryogenically-cooled versus water-cooled Ti:Sapphire amplifier technology.

Beyond the driving laser, the design of the HHG source itself needs to be carefully considered.  HHG, in general, remains an intense and exciting area of research with many laser scientists exploring different conversion media from atomic and molecular gases to liquids to solids.  The simplest (and most widely adopted) scheme has been with noble gases as the nonlinear medium of choice.  For HHG sources based on noble gas medium, three basic architectures exist:  gas jet, infinite cell, and capillary-guided.

The gas jet scheme is simple to implement but becomes expensive when targeting short EUV wavelengths, where higher gas pressures are needed to reach the cut-off frequency.  An infinite cell approach solves high maintenance costs, especially for experiments running neon gas, but scaling flux requires unreasonably large geometries. The patented capillary-guided HHG architecture solves both issues by providing a high pressure profile under low gas flow rates and a fairly long interaction length on a small scale.  Furthermore, a capillary-guided system provides an EUV pointing stability comparable to fiber lasers, which is critical when the EUV laser beams are intended for imaging and spectroscopy applications.  Based on these criteria, KMLabs has adopted the capillary-guided approach in its HHG source, the XUUS, as well as our Hyperion VUV laser system.

The KMLabs XUUS consists of the necessary equipment for the generation of EUV laser light, but optical elements are required to connect the source to an experiment at high efficiency, stability, and flexibility under vacuum.  This so-called vacuum beamline is an interconnected, evacuated, tubular conduit, which incorporates modular components that may be optionally and readily installed (by the customer) into the beamline and HHG system, as needed—without compromising the beamline vacuum.  These modules are used to reject excess IR light, filter the EUV spectrum, focus the EUV light, monitor the EUV power, replace capillary waveguides, and more.

A useful perspective on the importance of a beamline design can be gained by comparison to the synchrotron community.  The synchrotron itself is a large light source, but its functionality is derived from typically dozens of beamlines branching off the synchrotron ring tangentially and delivering light to multiple experimental end stations.  Consequently, beamline engineering at synchrotrons is a practice that has evolved and improved over decades, further empowering the (even more) impressive improvements in the storage rings themselves.

In contrast, laboratory experiments, by the nature of their light sources, tend to be more photon-limited. In these setups, flux is crucial and could be the determining factor in experiment viability. As a result, substantial effort has been placed in both improving the in-band photon flux of high harmonic light sources and removing the out-of-band flux. KMLabs has demonstrated both with the most recent engineering updates of its RAEA Ti:sapphire pump laser and XUUS high harmonic generation modules (which, together, form the critical components of the Pantheon light source). However, the attentive instrument designer is wise to note that one or two orders of magnitude difference in the light source flux are irrelevant if there are many orders of magnitude to be gained or lost in the beamline downstream. Clearly, the task at hand is to not only maximize the output of the light source, but also to ensure that no photons are being unnecessarily lost in the beamline before they reach the experiment.  To optimize one without the other leads to an experimental setup unable to reach its full potential.

The approach from KMLabs is a holistic view, where the functionality of the entire experimental system is considered in aggregate to ensure that not only is the light source providing the necessary photons, but they are actually reaching the experiment as efficiently as possible and with as little ongoing maintenance as possible.   Our Arterium vacuum beamline takes into consideration the following design aspects: 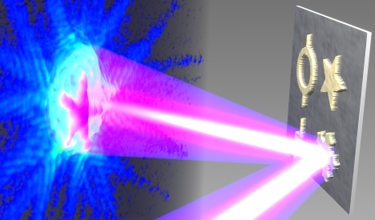 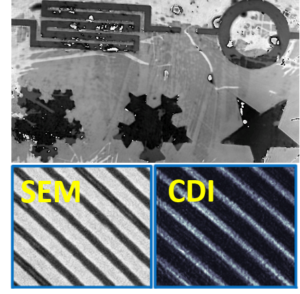