Why Use Cryogenic Cooling? 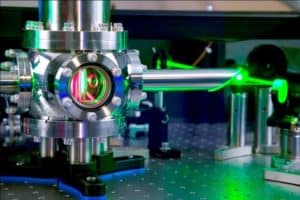 Whether in a regenerative or a multi-pass amplifier, the first stage is the one that is far-and-away most sensitive to the deleterious impact of thermal lensing.  This is because of the small mode size and the large number of passes through the gain material.  While it is possible to stabilize a first amplification stage under > 20 W-pump powers without cryo-cooling, the system is then restricted to operate only at a single power level (i.e. a single energy and repetition rate) without major system realignment, making it very limited in operation.  Moreover, higher order aberrations remain at these pump power levels, drastically limiting beam quality. Spatial filtering can restore beam quality but at the cost of laser efficiency and, therefore, of maximum operating power.

The advantage of cryo-cooling is very significant, and the technology for implementing it is simple, reliable, and cost-effective. Cooling a Ti:sapphire crystal to 50-80 K results in a greater than 200x´ decrease in thermally-induced distortions in the beam being amplified.  At 25 W pump power, the thermal lens corresponds to a 2.5 cm lens at room temperature, but to a > 10 meter lens at 77 K.  At 100 W, the thermal lens is < 1 cm at 300 K, but still several meters at 77 K.

KMLabs uses helium gas cryo-cooling systems. These are compact and maintenance-free and can be configured to minimize vibration for demanding applications such as carrier envelope stabilization.